The second Party Leaders Debate is taking place this Thursday starting at 8pm on Sky News. Nick Clegg, Gordon Brown and David Cameron will again be going head to head in a TV debate in the run up to the General Election on May 6th, this time leading on Foreign Affairs. 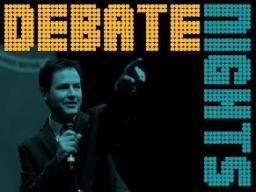 The first half of the 90 minute Election Debate on Sky News will be devoted to Foreign Affairs, with the rest on any topic. The debate comes from Bristol, and will be chaired by Adam Boulton. Sky are inviting questions before the debate, with more information athttp://news.sky.com/skynews/Election/debatequestion

You can see the debate live anywhere that you usually watch Sky News: Sky Digital Channel 501, Virgin Media Channel 602 and Freeview Channel 82 and online at skynews.com Live Video Streaming. BBC 2 will also be showing the debate in full at 11.30pm after Newsnight.

The third debate will take place on the BBC on 29th April at 8.30pm, focusing on the Economy.

Nick Clegg is widely judged to have won the first Party Leaders debate, watched by 9.9 million people, with the ITV/ComRes poll after the debate giving Nick Clegg 43% of the vote. Over the last week, the Liberal Democrats have seen a massive surge in the opinion polls.

In polls published on Tuesday, the Liberal Democrats lead in two, and polled between 34-26% of the vote in all of them:

There are a number of ways you can show your support for the Liberal Democrats General Election campaign: