Road to safer lorries made smoother

An agreement was reached late last night in Brussels over a new EU law that will allow life-saving changes to lorry designs. 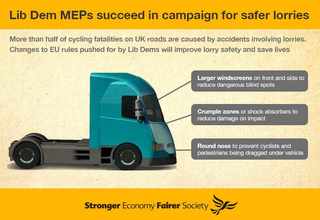 Under the compromise the new cab designs are to be delayed until 2019 and implemented by 2022.

This is two years later than the original implementation date of 2017, but much sooner than the ten-year delay that had been pushed for by some countries including France and Sweden.

"These changes will mean the introduction of safer, greener lorries on our roads by 2022.

"I would have liked to see these changes implemented sooner, but we've successfully fought against the EU governments and industry who wanted an unacceptable 10 year delay.

"It's now over to manufacturers to ensure safer lorry designs for cyclists and pedestrians."