Oxford trafficking charities welcome Cycle For Freedom to the city

Local charities dedicated to fighting human trafficking in Oxford took their message to the streets today. Oxford Community Against Trafficking (OXCAT) and Just Love were helped by the Cycle For Freedom team who stopped off in the city as part of their five-day tour of the country. 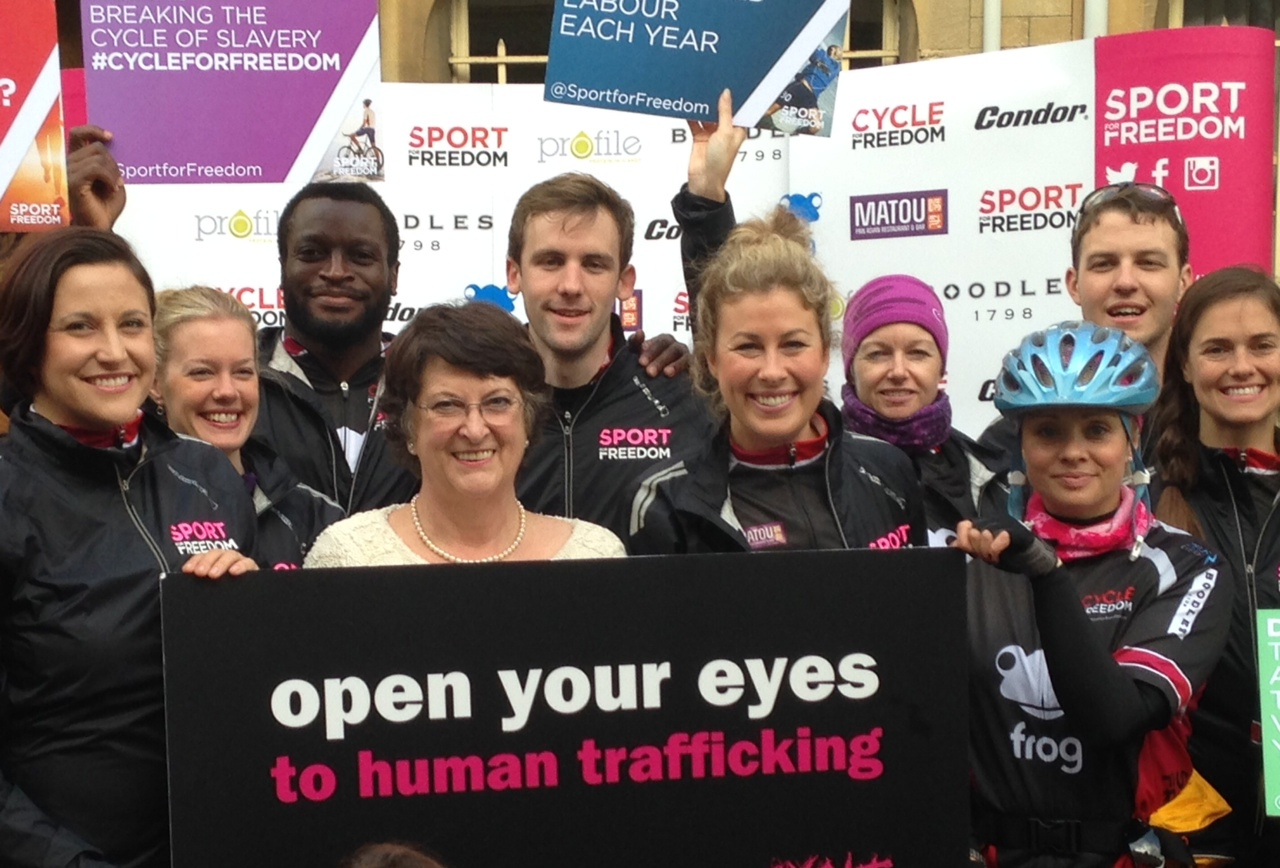 The cycling team joined local activists in a flash mob through the town centre with a line of 100 people walking to the beat of a drum with their hands bound together before setting off on the final leg of their journey to London.

Over 5,000 people are victims of human trafficking and slavery at any one time in the UK and there are estimated to be over 30 million victims worldwide, according the Anti-Trafficking Monitoring Group.

Catherine Bearder, local MEP and patron of OXCAT, and trafficking expert Hazel Thompson, one of the Cycle For Freedom team and award-winning photojournalist, then participated in a panel discussion informing local students about what they can do to fight trafficking.

Funds raised will go to Oxford Based charity Donnington Doorsteps for a child sexual exploitation prevention program Step Out and to the Salvation Army Anti-trafficking Unit.

Caroline Shephard of OXCAT said: "We're so pleased to welcome the Cycle For Freedom to Oxford as part of their gruelling journey. Raising the issue of human trafficking in Oxford is OXCAT's main goal, fighting trafficking in our communities begins by learning about it. That is why we've combined the visit with a panel discussion for local students. We all have to open our eyes."

Hannah Coates, Director of Just Love's Human Trafficking Action Group, added: "The Cycle For Freedom team are an inspiring example of what a group of people can do to bring more attention to human trafficking as well as raise vital funds to help victims on the ground. This is a fight we can all join and everyone has a part to play, in Oxford particularly."

Catherine Bearder, Member of the European Parliament for Oxford and patron of OXCAT said: "Oxford has seen several cases of trafficking and exploitation in the last few years. This most disgusting of crimes is still taking place behind closed doors. We all have a responsibility to know what signs to look out for."

Julia Immonen, CEO of Sport for Freedom, the charity behind the cycle, commented: "Many assume that slavery is an issue of the past, but recent statistics tell a different story. Thousands are still being trafficked within and into the UK for forced labour and sexual exploitation, and I am passionate to expose the injustice of slavery, which is a growing problem on our doorstep. Cycle for Freedom is an opportunity to educate and inspire others to take action and get involved through Sport for Freedom."

Today also marks the publication of a mid-term report monitoring the progress of the EU's 2012 - 2016 strategy: 'Working towards eradication of trafficking in human beings.'

This aims to better identify victims of trafficking and inform them of their rights, increase knowledge of the phenomenon and facilitate cooperation with non-EU countries among other measures.

The report comes at the same time as EU data on trafficking from the years 2010 - 2012 has been published. The data shows more than 30,000 victims were identified across the EU, over 1,000 child victims were registered and 80% of victims were female.