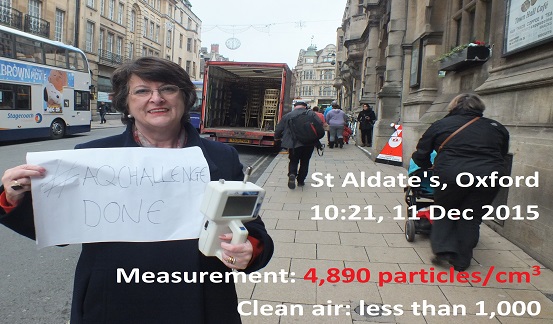 They were shocked the find out that Oxford’s air was 5 times over the legal limit.

The legal limit is 1000 particles per cubic centimetre, but Oxford’s air is a whopping 4,890!

The Healthy Air Campaign, headed by environmental law organisation ClientEarth, challenged the MEP to take the Air Quality Challenge in Oxford before she votes on a crucial air pollution issue in the European Parliament next week.

The city is not expected to meet legal limits of harmful nitrogen dioxide until 2020, which is ten years after the legal deadline.

Next week, UK MEPs in the Environment Committee have the opportunity to vote against a move by the British government and others that would relax emissions limits for vehicle manufacturers, meaning.

"A lot has been done to reduce pollution levels in Oxford, but the city is still failing to meet European standards.

"I want to raise awareness of the health impact of air pollution and what we can do about it.

"Most pollution comes from vehicles, that's why we need tougher rules to cut deadly emissions.

"Air pollution causes ten times more deaths than traffic accidents each year, we must do more to tackle this invisible killer."

“People in Oxford are breathing harmful levels of air pollution on a daily basis. We’ve asked Catherine Bearder to measure air pollution in the city and share the results to help raise awareness of this.

“Air pollution can have terrible effects on your health and is particularly dangerous for young children and older people. We think everybody has the right to breathe clean air so we’re calling on all MEPs to vote against attempts to relax the rules on traffic emissions.”

According to Oxford City Council figures, Oxford had levels of nitrogen dioxide 30% above the legal limit in 2014. Tens of thousands of people die from air pollution every year in the UK making it second only to smoking as a health risk.