Lib Dem Health minister Norman Lamb has visited Oxford's top medical research facility, the Jenner Institute, to see the important work they're doing in the fight against TB and Malaria and learn about how that worked is supported by the European Union. 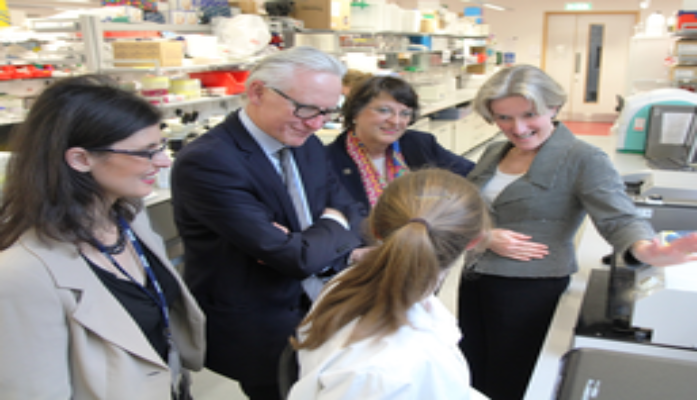 Norman was asked to visit the Jenner Institute by Catherine Bearder, local member of the European Parliament and they were joined by Prospective Parliamentary Candidate for Oxford West and Abingdon, Layla Moran.

The group was shown around the labs by Professor Helen McShane who explained the different forms of research undertaken at the Jenner Institute, particularly focusing on the projects seeking vaccinations for TB and Malaria. Two disaeses which kill millions of people every year.

"The work I have seen today here at the Jenner Institute in Oxford is incredibly important in tackling malaria and TB - two of the worst killers around the world.Thanks to EU financial support, Britain is continuing to lead the world in cutting-edge medical research.

"British universities receive £3bn from the EU to fund research - more than any other country - creating thousands of jobs, and enabling us to remain a global centre for science and innovation.

"The EU is co-ordinating a £64bn programme of medical research across Europe, tackling the world's greatest health challenges on a scale that no one country could hope to do alone. The work being done here in Oxford is just another example of why Britain is at its best on the world stage when we stand tall in Europe."

"European Commission funding is critical for research at the Jenner Institute and for the development of leading health technologies in Oxford and right across Europe.

"NEWTBVAC and Multimalvax are examples of major European collaborations on new vaccines for TB and malaria which could not have been supported by any other means."

"I'm delighted to be able to get Norman to Oxford to see the brilliant work being done at the Jenner.

"I'm particularly proud that these EU funded projects are being led from Oxford.

"We've heard today how much of a benefit UK membership of the EU is to projects like these. People need to remember that pulling out of Europe puts this funding, our ability to lead in these projects and loss of skills at risk."