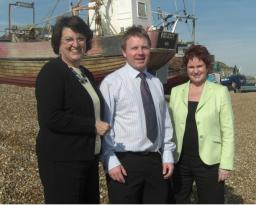 At a meeting in the European Parliament, Catherine told the new Commissioner about the problems faced by the South East's fishing fleet and the communities that support them. About 93% of the South East's fishing industry is made up of boats less than ten meters in length, and about 83% of our fishermen work out of these boats. However, the British government assigned only 3% of the quota to small boats (under ten meters) and the rest to large boats under the Producer Organisations.

The Commissioner committed to developing a sustainable policy for small scale fishing fleets and promised to consult with stakeholders on reforms to the Common Fisheries Policy.

Catherine said, "I asked the Commissioner how she intends to protect the future of small boat fishing fleets and the communities that depend on them, and I was pleased she realised how important this issue is for South East England."

"Local fishermen in small boats fish in a far more sustainable manner and are more likely to support their local communities than big producer organisations."

"It's not just the fishermen that struggle under these absurd quotas. The impact is felt by the local communities that depend on the fishing industry: by local food suppliers, the trades and professions that service the fleets, and the tourist industries that depend on these traditional ways of life."

"The social and economic well being of fishing communities must be intrinsic to reform of the Common Fisheries Policy."

"Our fishermen must be consulted and involved in the reforms of the Common Fisheries Policy because they're the ones that have to live with it after politicians have gone home."

"I've invited Commissioner to visit our fishing communities on the South Coast so she can see for herself the damage being done under the current system."

See below for the full text of Catherine's letter:

I am writing to you to follow up on the meeting at Parliament on the future of the Integrated Maritime Policy hosted by the Seas and Coastal Areas Intergroup. Maritime and Fisheries policy has a significant impact upon my constituency, the South East of England, and it is very important to me the voice of my constituents is listened to in any discussion on the future of these policies.

I was pleased to hear you say you are considering a policy for small fishing communities. Traditional fishing communities are an important part of our economic and cultural heritage in South East England. However, currently the fishermen in these communities are facing a hugely unfair and perilous situation. A significant proportion of the South East's fishing fleet consists of boats less than ten metres in length. In total, 93% of our fleet falls within this category and 83% of our fishermen work out of these boats. Across the whole UK 67% of fishing boats less than 10 meters are based in South East England. Despite this, the British government assigned 3% of the national quota to small boats (less than ten metres) and the rest to large boats under the Producer Organisations. As you can imagine, our fishermen are being forced to fight for their survival, as are the local communities that depend on them.

The disproportionate quota has already had a hugely detrimental effect upon our fishing communities. Historically, small fishing boats have caught up to 90% of cod in our part of the English Channel. However, the distribution of cod was ultimately determined in March 2009 as 30% to small boats and 70% to Producer Organisations. Nationwide, around 1,000 small boats have disappeared from our ports over the past decade, and the total number of fishermen in the UK has decreased by a third.

The Commission's Green Paper on the Reform of the Common Fisheries Policy (2009) states, it is 'essential to secure a future for coastal, small-scale, and recreational fishermen.' I strongly believe we have a responsibility at the European level to defend the social and economic well being of communities presently being failed so badly by my own Government. When our fleets struggle, our communities struggle. The impact is felt by all who depend on the fishing industry: by local food suppliers, the trades and professions that service the fleets, and the tourist industries that depend on these traditional ways of life. Protecting the social and economic well being of traditional fishing communities should be intrinsic to any reform of European maritime or fisheries policy. The manner in which the UK Government is interpreting and implementing European law is failing to safeguard their future. I urge you to take action to help us save our local fishing communities.

It is important fishing communities are consulted and involved in the reforms of the Common Fisheries Policy. The Green Paper states 'decisions concerning small-scale fleets should be taken as close as possible to the coastal community', and we need to make sure this occurs. After all, when politicians have gone home it is these communities that have to live and work by the policies we create.

Meeting with these fishermen and gaining a more comprehensive understanding of the problems they face will inevitably have a positive impact on any policy reform. Therefore Commissioner, I would like to extend an invitation to you and your staff to visit South East England to see first-hand the situation I have described, to see the damage being caused to fishing communities under the current system. We have in Hastings an active fleet with leaders of the UK fishing community. They would be delighted to host a visit in the coming months and would welcome the opportunity to speak with you and show you their operations. My office will be pleased to coordinate this visit if you are able to come.