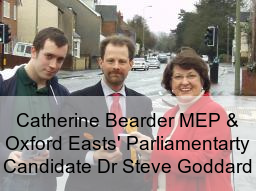 Meeting local residents they were keen to know how they felt about the Labour government and the way they had been let down locally.

Catherine said, "It's clear that residents in Oxford East are struggling after years of this Labour Government."

"Oxford East is crying out for change."

"Residents here need an MP who will fight for local people, not one that talks local but when in Westminster votes the way the Government tell him."

"Steve Goddard can bring the change that's needed and he will bring fairness to Oxford East."

Local people who have previously voted Conservative told Catherine they will be backing Steve this time.