A cross party campaign to end the European Parliament's monthly travelling circus from Brussels to its second seat in Strasbourg is gathering momentum - despite attempts today to throw it off course. 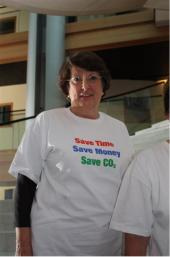 he Parliament does most of its work in Brussels, but is forced by the EU treaties to travel to Strasbourg for 12 sessions every year in a second Parliament building. The total cost to the taxpayer of this travelling circus is £160 million a year and the total cost to the environment is 20,000 tonnes of CO2 emissions.

But an amendment to the 2012 calendar of sittings proposing two sessions be squeezed into one week in September has gained huge support from MEPs. However, opponents of the amendments voted to postpone the agreement of the calendar votes, buying themselves more time.

South East Lib Dem Euro MP Catherine Bearder, a leading member of the campaign to scrap all of the Strasbourg sessions, commented, "The campaign to scrap the second Parliament in Strasbourg has gained huge momentum this week. Supporters of the travelling circus have bought themselves some time but we will be back to fight them on this issue."

"Getting MEPs to travel to Strasbourg every month is like asking Westminster MPs, their staff, papers and the whole parliamentary support staff to move from the Houses of Parliament from London to Liverpool once a month - its crazy!"

"How can the European Parliament spend £160 million a year on moving to Strasbourg every month, as well as paying the permanent staff there to do nothing whilst we are in Brussels, when teachers and nurses are losing their jobs because of public spending cuts?"

"Every month 736 MEPs, thousands of staff and lorries carrying 3500 trunks full of paperwork trundle there and back."

"Unfortunately, it is up to the 27 national governments to decide where the European Parliament sits, not the MEPs. But we will battle on until our campaign is won."