Make it a fairtrade Easter with #traffikfree chocolate

Shopkeepers and supermarkets are being urged to make sure shelves are stocked with Easter eggs made with traffick-free chocolate. 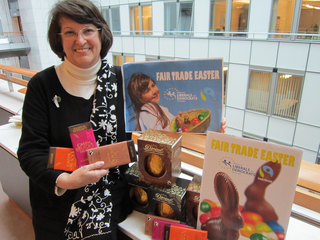 South East MEP Catherine Bearder is supporting charity Stop the Traffik's campaign calling on shops to make sure the Easter eggs they sell are not made using child labour.

She said: "Despite the hard work of groups such as Stop the Traffik, it is still tricky to buy Easter Eggs which are Fairtrade. I think the change will only happen with pressure from shoppers.

"I am encouraged by European Union efforts to ensure a fair deal for African farmers producing cocoa.

"But more needs to be done to stop exploitation of child labour on plantations… and we can start by demanding changes in shops."

Catherine visited a cocoa factory in the Ivory Coast and learned about the battle to ensure cocoa plantations do not use child labour.

Stop the Traffik said children are trapped in the worst forms of exploitative labour across West Africa where two thirds of the world's cocoa is sourced.

The charity has produced a letter for supporters to send to local shopkeepers or store managers, encouraging them to stock chocolate branded with a Fairtrade, Rainforest Alliance or UTZ logo.

It can be downloaded from http://www.stopthetraffik.org/campaign/chocolate.

And the European Parliament is working towards a new international cocoa agreement, which is aiming to regulate the industry and includes tackling child labour.

Last year Catherine called on the European Commission to work to stop human trafficking in countries, such as Ghana and Ivory Coast.

"Guilt over overindulging on Easter eggs is one thing… let's not feel guilty about the source of our chocolate."

Please note spelling of charity Stop the Traffik. You can log on for more information at http://www.stopthetraffik.org/campaign/chocolate/what-you-can-do/61

Show your support on Twitter by using hashtag #traffikfree