South East MEP Catherine Bearder has criticised a European Court of Justice ruling that pollen must be listed as an ingredient of honey as it could drive local Beekeepers out of business. 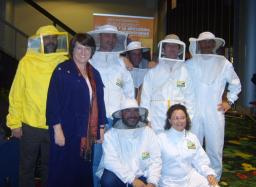 The judgment by the European Court of Justice means that all jars of honey may have to be relabelled to show that they contain pollen, which manufacturers will have to prove is not genetically modified.

Honey has always been considered an entirely pure product for the purposes of food labelling laws. But Europe's highest court has now decreed that pollen is an ingredient of honey rather than an intrinsic, natural component.

Rowse, Britain's biggest honey supplier estimates that re-labelling and testing all its products will cost hundreds of thousands of pounds. Industry experts have warned that the ruling could drive smaller British honey suppliers and beekeepers out of business.

The case arose after a German amateur beekeeper found small amounts of GM pollen in his honey.

He sued the State of Bavaria, which owned trial GM maize plots near his hives, and the case went all the way to the ECJ.

Suppliers of honey whose pollen is found to be more than 0.9 per cent GM will have to undergo full safety authorisation and label their honey accordingly.