Catherine Bearder MEP has welcomed the news Liberal Democrats in Government have vetoed Conservative plans to opt out of key EU crime-fighting measures. 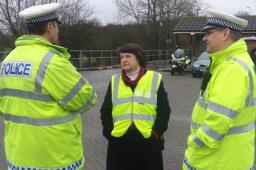 The UK has the option of leaving a series of cross-border EU crime fighting measures as part of the Lisbon Treaty and must make a decision by next year.

Earlier today (Tuesday, July 9), following prolonged negotiations within the coalition, Home Secretary Theresa May announced the Government will be opting back in to 35 of the 136 measures, including all those regarded as vital by the Association of Chief Police Officers.

Catherine said: "The Tories are so blinded by their anti-EU prejudice that they have gone soft on crime. They were proposing to withdraw from key European crime-fighting measures which leading British law enforcement experts have repeatedly warned are vital for Britain's security.

"Lib Dems were determined not to let ideology trump the safety of the British people and have ensured that UK will remain part of crucial measures such as the European Arrest Warrant, which has led to the capture of thousands of criminals including murderers, human traffickers, paedophiles and terrorists.

"The reckless Tory plans to withdraw from this kind of cooperation would have left our police with both hands tied behind their back, allowing criminals to escape the long arm of the law.

"Liberal Democrats will continue to ensure British police forces have the necessary tools to keep people safe and tackle transnational crimes such as human trafficking, drug smuggling and child abuse effectively. 21st century criminal gangs do not stop at our borders."