The British Government is failing thousands of victims of trafficking despite pledging to clampdown on the problem, Catherine Bearder MEP has said. 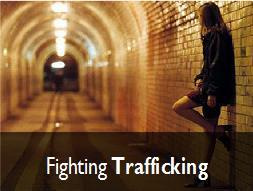 It comes as a Eurostat report criticised 21 EU member states, including the UK, for failing to implement into national law the EU directive on human trafficking.

European Commissioner for Home Affairs Cecilia Malstrőm expressed 'profound concern' at the increase in trafficking across the EU.

The study has also revealed 80 per cent of the victims are women and young girls.

Catherine fronts the #OpenYourEyes campaign to raise awareness of trafficking.

She said: "This woeful display of inaction is staggering. Member states acknowledged the problem, then shut the door and walked away from victims."

Catherine encouraged the UK Government to sign the EU directive on human trafficking in 2011, but believes it has failed to back its pledge to victims.

She added: "Every EU country must implement the legislation and prioritise investigations into these crimes.

"Meanwhile, the Tories and UKIP are campaigning to withdraw from crimefighting measures which are aimed at tackling trafficking gangs.

"These chilling statistics will show how wrong they are."

The report showed human trafficking increased by 18 per cent between 2008 and 2010, while the number of convictions dropped by 13 per cent.

Directive 2011/36/EU on preventing and combating trafficking in human beings and protecting its victims was adopted in March 2011 by the European Council and the European Parliament.

The legislation was supposed to make sure courts throughout the EU focused on the crimes and ensured all countries offered proper support to victims.

But only six countries have introduced the directive in full, including Czech Republic, Finland, Hungary, Latvia, Poland and Sweden.

"Tackling poverty and ignorance is one part of the solution, but effective international police action throughout Europe is another."

The report showed 68 per cent of victims were women, 17 per cent were men, 12 per cent girls and three per cent boys.