A major step was today (Thursday, May 30) taken to rebuild Europe's depleted fish stocks and protect fishermen on the south coast. 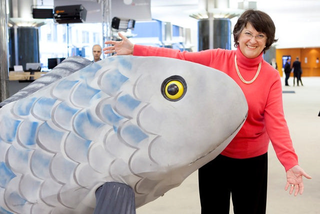 A deal struck between European Parliament and Council negotiators should put an end to the discard of millions of tonnes of fish each year.

Catherine Bearder, an MEP for the South East, said the move would protect sustainable fishing practices, such as those used by the region's trawlers.

She said: "Overfishing has plundered our seas and destroyed hundreds of jobs in the industry across the South East.

"At long last there seems to be an appetite to listen to scientists, cut discards and improve fishing in the region.

"This shows EU polices can be changed for the better."

At the moment, European fishermen throw away almost two million metric tonnes of dead, or dying, fish back into the sea every year.

However, last night's decision means there will be an obligation to land all pelagic fish, such as mackerel, from January 1 2015.

Fishermen will also have a new role in determining practices appropriate to local conditions as micro-management from Brussels is reduced.

Catherine also met fishermen in Eastbourne who explained how extensive changes were needed to keep crews in business.

More details on the new deal at http://www.europarl.europa.eu/news/en/pressroom/content/20130527IPR10573/html/European-Parliament-secures-sustainable-fisheries-policy