The first of the series of four hustings was held in Oxford at the weekend. 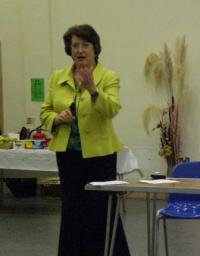 Catherine told the audience that she was pleased to walk to the venue as Saturday was World Car Free Day, but it did help that the hustings was held only a few hundred metres from her home!

Catherine told the meeting about her life experiences that has prepared her for becoming an MEP and she outlined her agenda that she hopes to be able to accomplish when becoming an MEP.

The environment and climate change, action to tackle the trade in trafficking women and children and making Europe more democratic and relevant to UK citizens are her aim. But she is aware that putting resources into local campaigning and helping local parties to elect more Liberal Democrats is also of vital importance.

"My aim is to continue to work tirelessly for the LDs in every part of the region" she told the audience in Oxford, "I don't promise what I can't deliver, I will get things done on liberal issues and I'll get things done to win more councillors, seats and votes in the South East".

The next hustings is on Saturday 29th September at the Maybury Centre in Woking at 2pm.