This week, Catherine Bearder MEP met with a director of Wightlink one of the ferry services to the Isle of Wight, to discuss a number of European issues that affect them and was also given the opportunity to make the crossing on the bridge with the Captain of one of their ferries. 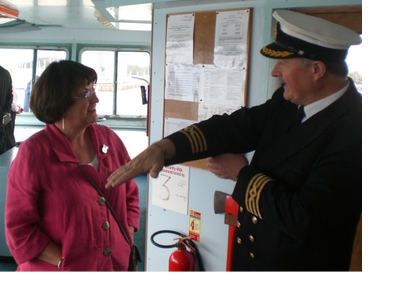 Catherine discussed a number of issues that have affected and are due to affect the ferry operator in the future and also learnt about the crucial role this service plays in so many parts of the Island's life.

"As well as supporting tourism and acting as the link for many Islanders to get to the mainland (some daily for work), the ferry also allows the delivery of food for the supermarkets and medicines for the hospital."

After this meeting she was invited to make the crossing on the bridge of the ferry and was able to hear first hand from one of their Captains about issues that most affect them.

Catherine was surprised to hear that safety concerns around small boats in shipping lanes was by far the Captain's top issue.

"I was interested to learn that there are no licensing requirements to sail boats in the UK.

"The Captain informed me that this is not the case in other European countries and asked if I would take this issue forward.

"The Wighlink ferries sail in one of the busiest shipping lanes in Europe and a novice taking a boat on the Solent is like someone buying a bicycle and taking it on the M25!

"Clearly, there are many amateur sailors that know what they're doing but the Captain pointed out that there's no way of separating those from the ones that don't.