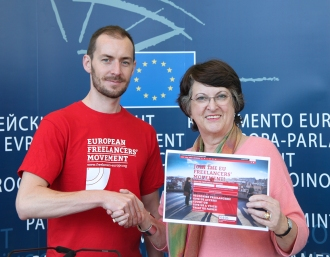 Catherine Bearder MEP met with members of the European Freelancers' Movement today, who handed over supporters' signatures and delivered a Manifesto raising a strong voice in support of independent and self-employed workers.

"Freelancers and self-employed workers are a large and growing part of the European workforce, but we are ignored and isolated," said Joel Dullroy, campaign manager of the European Freelancers' Movement. "We went to Brussels to tell policy-makers that we should be taken seriously."

"Self-employed workers and freelancers deserve to participate fully in the work and policies of the EU.

"This should be one of the core principles driving the work of the new European Commission."