Appalled by the figures of children being trafficked across and through Europe, Local European campaigner, Catherine Bearder has called on people in Oxfordshire to sign up to the petition that calls the European Parliament to take action to stop this. 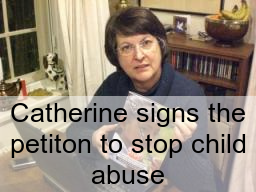 The petition, at www.sayno.eu, is aiming to get 1 million signatures to alert the government here as well as the European Parliament to take action now. [the Declaration in Support of the Fight Against Child Sex Exploitation and Abuse]

Catherine said, "I hate the fact that this trade is continuing in what we believe is a civilized continent, and yet the facts are that children are still being bought and sold for profit in the sex trade. As a mother myself, I know just how dependent and vulnerable young children are. I would like the people of Oxfordshire to do something positive to stop this vile trade and to add their voice to this campaign".

Visit the website www.sayno.eu to add your signature to speed up the campaign.