Europe should get tough on illegal eggs

A ban on battery hens should be strictly enforced across the European Union, Catherine Bearder MEP insisted today. 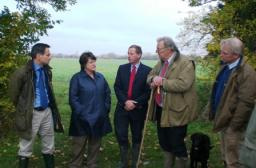 Cramped cages are supposed to be outlawed from January 1, but it has emerged the EU will not enforce a ban on non-compliant countries.

Meanwhile, egg farmers in the UK have spent around £400m on larger cages for their birds, despite 13 out of 27 EU countries refusing to take similar action.

The UK Government today outlined what it had done to clampdown on illegal eggs being sold in this country.

But Catherine has stressed the need for the European Commission to enforce its ruling across all member states.

She said: "British farmers will be at a huge disadvantage despite taking this important moral stand and that is completely unacceptable.

"I am determined our farmers are rewarded for high welfare standards instead of being punished in the marketplace."

The EU passed the law in 1999, but it is thought there will still be 50 million battery hens across the EU producing eggs in 2012.

The Government has said imported eggs will be screened from January, and UK supermarkets have already agreed not to put illegal eggs on their shelves.

However, a loophole means powdered or liquid eggs in products imported into the UK would slip under the radar.

Catherine added: "It is positive the coalition Government is taking a tough stance on illegal eggs being imported into this country.

"But it is, frankly, unforgiveable some EU member states have made so little progress to stop using cruel battery cages. It is time the European Commission sent out a strong message to countries which don't see animal welfare as a priority."

The new rules prevent animals being kept in cages with less than 45cm of headroom and 750 square cm floor space per hen. It also means new cages must be equipped with a nest and litter to allow pecking and scratching.