Today local Euro MP Catherine Bearder took part in celebrations to mark the 20th anniversary of the fall of the Berlin Wall. 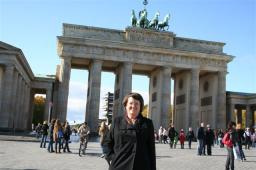 On 9th November 1989 over a million people in East Germany took part in a protest that ended with the Berlin Wall tumbling down. This set off a chain of events that led the countries of Eastern Europe to "return to Europe"*.

"The Berlin Wall was a physical barrier that represented the divisions we Europeans have built between ourselves for centuries."

"When people gathered in East Germany and demanded their right to live without these divisions imposed upon them, they beckoned in a new era of European history."

"Since 1989 Eastern and Western Europe have been united under the banner of the European Union. The EU was founded on a spirit of cooperation. There are so many people working in the European Union so that Europe will not be divided again."