We have become weather-worn by the constant trickle of 'meddling Brussels bureaucrat' headlines and the downright barmy tales hot from some of Britain's Eurosceptic newsdesks. 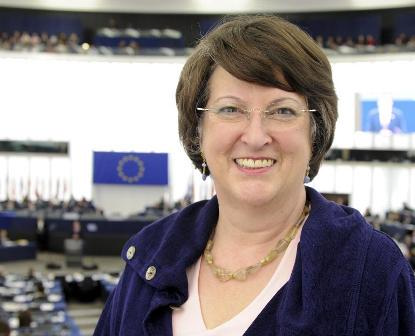 The bluster caused by these headlines often glosses over some far more important misconceptions, which are also vital to nip-in-the-bud.

I have come up with my top Euromyths, which should help banish any thoughts on a European super army, a President of Europe and, of course, a ban on bendy bananas... some will be familiar to those of you who get my regular newsletter, but I would love to hear your favourites.

So, let me know the bizarre tales you have heard about the EU, or perhaps you just need clarificiation on statisitcs, statements or stories, either way log on at http://www.facebook.com/EuromythBuster?ref=hl

1) Top of the charts has to be: Brussels bureaucrats impose laws upon us and we have no say in it… not true. The commission has no power to impose law on EU countries, it can only propose legislation. Its proposals are sent to ELECTED MEPs in the parliament and the national Governments in the Council where they are amended until everyone is happy. Only after this process are they turned into law. Important to remember: the British Government and Euro-MPs are elected by British people and have a say at every stage of the legislative process.

2) Why not be like Norway? There is a common belief Britain would gain sovereignty by leaving the EU and joining the European Economic Area (EEA)… unlikely. EEA membership means access to Single Market, yes, but ask Norway about its sovereignty. It is subject to, and pays for all EU Single Market Agreements, but - unlike the UK - has no power to decide what they are, as this is done by the democratic process referred to above and they are not party to that. It is commonly referred to as Government by fax because law makers in Oslo sit by their fax machines waiting for messages from Brussels to find out what laws they will have to implement.

3) The EU is destined to become a European superstate… just you wait and see. I don't think so, somewhat paranoid I suggest. The member countries are the most important part of the EU and they have the power over the EU and what it does. Clause 3b of Maastricht states: "The (European) Community shall take action, in accordance with the principle of subsidiarity, only if and in so far as the objectives of the proposed action cannot be sufficiently achieved by the member states and… can be better achieved by the community."

4) Brussels is trying to build an EU army… no, plain and simple. Many people choose to believe different, but the Common Security and Defence Policy does not create a Euro Army, instead it helps national armies within the EU to work more closely together on joint projects, which can save money and resources, in a similar way that NATO has since the end of the Second World War. It is important to point out, if the British Government does not want the British Army to take part in a European campaign then it will not. The British Government always remains 100 per cent sovereign over the British Army.

5) Meddling Brussels bureaucrats are completely unaccountable… this is not true. Commissioners are appointed by EU heads of government (just as the British government ministers and ambassadors are appointed by their own head of government). They can only take office with the approval of the European Parliament, which is made up of directly elected MEPs and can be dismissed by the European Parliament in a collective vote of no confidence.

6) Europe is overrun by Brussels bureaucrats desperately attempting to justify their jobs… this is one of the biggest misconceptions. As an MEP I believe in getting the best deal for the British tax payer and have voted for measures to see a cut in the money spent on red tape, closing Strasbourg and having a single parliamentary seat is one. But, on staff numbers, it's worth highlighting the Commission employs around 23,000 people, including 1,800 translators / interpreters and more than 9,000 secretarial and support staff. Compare that figure to your local county council.

8) The jam jar storm… because it shows Euromyths are still alive and well. Recent media coverage on an EU ban on reusing jars for homemade jams for sale at charity events managed to whip up a frenzy. There are no EU laws, new or old, which ban re-using old jam jars for domestic use or for small scale fundraising events. The EU also has no powers to fine people. There is EU food safety and hygiene legislation - notably so the UK and other countries can be confident thatfood imported from or bought elsewhere in the EU is safe and of high quality. The WI can breathe easy!

9) Curved bananas are banned… let's make this short and snappy shall we? Like all other fruits, bananas are simply classified according to quality and size for international trade under EU agreements. It brings together standards many Governments and the industry already had in place any way. There was a similar situation recently with concern over alleged health and safety demands being made by the EU over hairdressing salons, not very much digging revealed the suggestions had actually come from - and were endorsed - by salon owners themselves.

10) Standardising the Euro Sausage… they can't stop us eating the British sausage can they? Did anyone swallow it? Well, almost. An episode of Yes Minister parodied the Euromyth with great success by claiming the EU wanted to rebrand the British banger as the 'emulsified high-fat offal tube'. The EU did, however, encourage better labelling of food, including making it compulsory when a product contained 'mechanically recovered meat'… which can, in my opinion, only be a good thing! It means anywhere in the 27 EU member states, you should know exactly what is in your food.