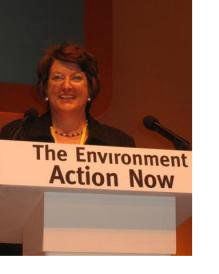 Article 7a of the Fuel Quality Directive adopted in 2009 set a binding target to cut CO2 emissions from transport fuel production by 6% by 2020. The Commission's original plan to introduce a specific CO2 rating for fuels produced from polluting tar sands looked set to be dropped after an unprecedented lobbying campaign by the Canadian government and oil interests.

However, the Commission has now reverted to its original plan and included individual values for different sources of fossil fuels, including tar sands, in a proposal outlining the detailed implementation of the law.

The effect of the CO2 ratings will be to provide an incentive to dirty fossil fuel producers to clean up their act if they want to compete with cleaner sources on the European market.

Catherine Bearder who is President of the Green Liberal Democrats and one of the fiercest opponents of tar sands in the European Parliament said:

"I'm proud of the European Union for standing their ground and leading the way by taking this important step towards meeting our commitments to cut greenhouse gas emissions by 2020.

"I have been following the issue closely and have been calling for an ambitious and fair fuel quality directive that doesn't mask the pollution behind tar sands.

"This is fantastic news and the Commission, particularly Connie Hedegaard, the climate commissioner should be applauded for not backing down in the face of huge pressure from Canada and the oil industry."

The proposal still needs to be approved by national governments in the coming months.

The European Parliament has already pledged its support with a resolution earlier this year raising concerns about tar sands in the context of EU-Canada trade negotiations. A petition against tar sands, containing over 20,000 signatures, was presented to the Parliament in March 2011.