A deal on car emissions agreed at the European Parliament will bolster South East car makers and save drivers up to £850 a year. 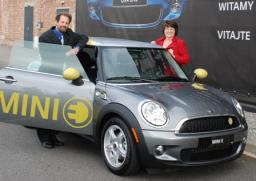 The agreement between MEPs and national governments confirms ambitious CO2 emission targets for 2020 and rewards makers of polluting cars if they also produce low carbon vehicles.

A Commission impact assessment estimated the deal could be around £850 for an average driver and save up to six per cent of UK oil imports by 2020.

Catherine Bearder, an MEP for the South East who visited car maker BMW this week, said Monday's new deal is also a welcome boost to the local economy.

She said: "This is great news for the region. Many thousands of jobs in the area are dependent on the car industry and this deal will give much needed certainty to manufacturers and boost the production of low carbon cars.

"I have seen this week the engineering breakthroughs being made by BMW to change the way we drive.

"The deal which has been agreed in Brussels is good for jobs and growth here in the region. But this will also benefit drivers by making cars more fuel efficient and cheaper to run."

The deal reached on Monday will now have to be approved by EU Member States and the Parliament's plenary before coming into force.

Catherine added: "We want to build a stronger, greener economy and this is a great example of doing just that.

"Everyone wants more fuel-efficient cars with low emissions and this will help keep European car manufacturers ahead of the game."