EU and the British Press debate calls for honesty in reporting on the European Union. 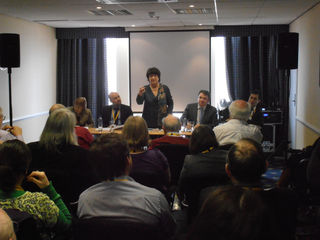 A packed out Catherine Bearder-hosted event at Liberal Democrat Spring Conference, in Brighton, on Saturday heard views on the UK media's relationship with the EU.

The panel included Mary Honeyball, Labour MEP for London, Petros Fassoulas, chairman of the European Movement UK, Tim Aker, from the Get Britain Out Campaign, and Dr Evan Harris, from Hacked Off.

Catherine said: "The Euromyth has been fuelled journalists for many years… some of the stories have been ludicrous, some have been genuinely funny. Plenty have been disingenuous.

"The invented tales have the ability to terrify and, frankly, amuse the public. But the chunky catalogue of Euromyths has succeeded in spreading one thing: CONFUSION.

"David Cameron's referendum pledge means it's time to do away with the fantasy. Otherwise, how can the British public be expected to make an informed decision?"

Some of the Euromyths mentioned during the fringe meeting, included:

- 'True' or 'false' - it is illegal to sell bananas if they are too curvy… false, the current EU standards are identical to the pre-existing British ones. Nothing changed, but the story has become one of the most well entrenched Euromyths in British media history.

- 'True' or 'false' - tightrope walkers have been forced to wear hardhats because of an EU directive… well, true, according to the Telegraph in 2003, but circus lovers in the room will note the fax does not yet seemed to have reached Big Tops… it is only true in the construction industry, which makes sense!

- 'True' or 'false' - meddling Brussels Bureaucrats demanded the British change the name of Bombay Mix to Mumbai Mix… you can breathe a sigh of relief, despite a story in July 2006, there has never been any suggestion of a such an invasion on our bar snacks.

The event included a discussion about the impact of the Leveson inquiry on reporting of European Union issues.

You can find out more about Catherine Bearder's campaign at www.facebook.com/EuromythBuster