Don't sell off the elephants' future

Lib Dem MEP Catherine Bearder has called on the governments of Europe to take a united stand in opposition to the proposed ivory sale. 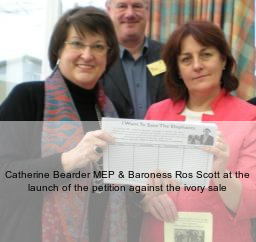 This week CITES* is meeting in Doha. Their agenda includes the highly anticipated discussion on Tanzania and Zambia's request for a one-off sale of their ivory stocks.

Catherine, a life-long conservationist and member of the European Parliament's delegation to Africa, said, "as my petition shows, there is huge opposition to the proposed ivory sale. When combined with the signatures from organisations I've been in contact with, over 400,000 people have signed in protest."

"I've met with delegations from Africa, colleagues from across Europe and been approached by many of my constituents on this matter. The message I'm hearing is consistent: they do not want this sale to take place."

"The benefits of the sale are heavily outweighed by the costs of reinvigorating demand for ivory."

"If people think poachers will just go home after the sale, when they know there are people willing to pay for elephant tusks, then they are grossly mistaken."

"I hope the European governments will act together and make a common stand against these proposals."