Catherine Bearder MEP has met with the Zimbabwean Deputy Minister for Foreign Affairs and National Healing Minister Moses Mzila-Ndlovu to discuss the current state of affairs and the outlook for democratic reform in Zimbabwe. 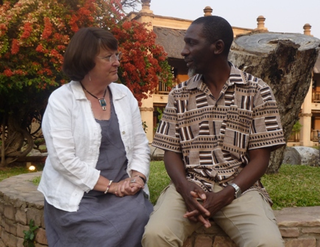 Catherine who is a member of the ACP (African Caribbean and Pacific) Delegation from the EU discussed with Mr Mzila-Ndlovu his recent incarceration by his own government for addressing and organising a prayer meeting.

"Following this meeting and I have great concerns about the progress to democracy in Zimbabwe."

"Hearing directly from Moses about the struggle he and his colleagues are going through really emphasises how far Zimbabwe is from real democratic reform."

"Mugabe is not committing to the undertakings he gave to the leaders of Southern Africa nations after they demanded he ends violence and arbitrary arrests, and to carry out political reforms he signed up to with the establishment of the coalition government two years ago."

"Zimbabwe seems to have slipped from the radar of many in the west but we need to ensure that the work of people like Mr Mzila-Ndlovu doesn't go unrecognised or unsupported."