Death of sheep at Ramsgate cannot be ignored 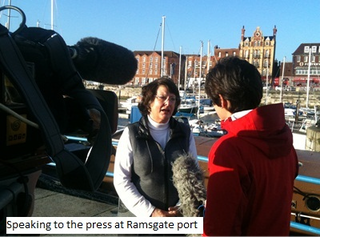 It comes as the RSPCA reported 45 sheep died after a truck was stopped at Ramsgate on Wednesday morning.

Two sheep, one with a broken leg, were put down another two drowned. Meanwhile, 41 severely lame sheep will be shot.

Two French lorry drivers were thought to have been arrested in connection with the incident.

The '8hrs Campaign' has already called on the European Union to toughen up rules on the length of journeys truckloads of animals endure on their way to the slaughterhouse.

Catherine, who has signed the petition along with one million people, has pledged to rally the Commission to take quicker action.

She said: "Surely, yesterday's incident is all the evidence the Commission needs to take long term action on animal exports.

"This is animal cruelty in the extreme and I not happy for the issue to drag on, we need immediate action."

Catherine today asked the Commission to ensure existing legislation is being enforced and what progress is being made on the eight hour bid.

In March, the European Parliament adopted a written declaration, which calls on the Commission to establish a maximum eight hour limit for animals taken to slaughter.

Ian Driver, founder of pressure group Thanet Against Live Exports, is backing demands for live animals exports to be suspended from Ramsgate.

He said: "Something has to be done - and fast - to stop compromising the safety of animals being transported through this port."

A petition signed by 1,103,248 people across Europe was handed to Commissioner John Dalli following a meeting with MEPS.

Catherine added: "Europe is speaking with one voice… eight hours is more than enough for live animal export and the regulation must change."