Commission gets the message from Eastbourne fish fighters

Hundreds of petition cards were this week handed to the European Commission in a bid to force a review of EU fishing laws. 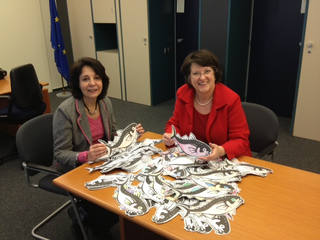 Catherine said the 600 cards, which were given to EU fisheries commissioner Maria Damanaki, would show the strength of feeling on the issue.

She said: "Small-scale fishermen are being punished in places such as Eastbourne and across the south coast. But they are the ones leading the way in sustainable fishing.

"The future of fishing is on the line and we cannot afford to plunder fish stocks anymore."

The petitions call for an end to the practice of discards, ending harmful subsidies and rewarding fishermen who fish sustainably.

The Eastbourne event was part of the Be a Fisherman's Friend campaign, which has pulled together fishermen from around the South East and South West in an effort to change the EU Common Fisheries Policy.

Local fishermen, Eastbourne MP Stephen Lloyd and Greenpeace campaigners met Catherine to discuss radical reform of the law, which can only be changed once a decade.

Commissioner Damanaki welcomed the petitions and emphasized the key role that EU citizens can play in supporting the on-going reform of the Common Fisheries Policy.

It comes after Catherine this week backed moves to help small-scale fishermen, who will now be able to catch Baltic cod in coastal areas during the closed-season summer months.

The parliament agreed Baltic cod stocks are recovering and can be fished under sustainable environmental and economic conditions.