Clegg and Cameron European Voice's Politicians of the Year

European Voice has awarded Politician of the Year 2010 jointly to Nick Clegg and David Cameron. 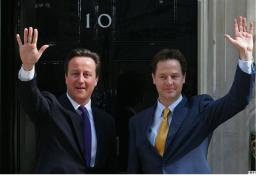 After the UK General Election in May, Clegg and Cameron formed a coalition government between the Liberal Democrats and the Conservative Party - the first coalition in the UK since the National Government that existed during the Second World War.

Liberal Democrat MEP Catherine Bearder was very pleased Clegg and Cameron won the award and sent her congratulations to the pair. Catherine commented, "The forming of the coalition government was an historic occasion.

"With the political system we have in the UK, we have been stuck between a blue government one year and a red government the next - often given majorities by a minority of the people."

"This year, when the voters gave no party an overall majority, we were faced with an opportunity to prove that a more cooperative form of government works better."

"The next step is to reform our voting system. AV will make all votes count and ensure the UK political system is much fairer."