Catherine Bearder has been nominated for the prestigious Patsy Calton Award. 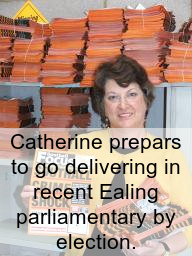 The Women Liberal Democrats have created this award for women in the party in memory of the late Patsy Calton, who was an inspirational woman councillor and Member of Parliament, and in recognition of her long service and contribution to the party and women in particular.

The award will be presented to the finalist by the president of the party, Simon Hughes MP at the conference in Brighton on Wednesday 19th September. All the nominated women have been invited to a reception afterwards in the Holiday Inn.

Catherine said "I was delighted and amazed to be nominated, I am sure there will be stiff competition for this award as I know so many hard working women in the party. My fingers are crossed until the result is announced."