The UK delegation of Liberal Democrats were again the largest group at the gathering of Liberals at the ELDR Congress in Stockholm last week. 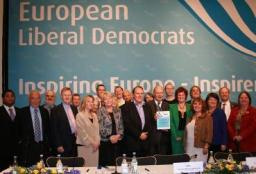 23 members of Liberal Democrats played their part in the finalising of the manifesto for the European elections next June as well as debating and passing a number of policy motions. The congress heard presentations, including a video presentation from Graham Watson, from European Liberals including one head of state, 2 Commissioners and other leading politician from across the continent.

Attending from the UK were:

Liberal Youth reps and other members.

Catherine said, "I was pleased to be in the environment working group working on the manifesto. I was able to help ensure that it is a priority for Liberals to be fighting to save the natural environment, work to reduce the effects of climate change and the causes of it and to develop a sensible and sustainable energy policy in the next parliament. These are all things that I feel are of paramount importance."