Last night at a packed meeting of the Henley Liberal Democrats, Stephen Kearney was chosen as the candidate to fight the by election that is expected soon when the current Tory MP, Boris Johnson steps down following his election to London Mayor. 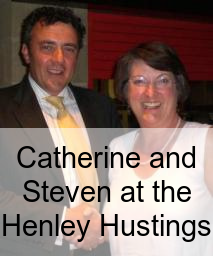 The members chose Steven Kearney and Catherine was there to congratulate him. Stephen said "I am delighted to have been elected as the candidate. I believe that our policies link to the grassroots of this area. People are desperate for quality leadership after years of Tory neglect at Council level, they want policies and vision and the Lib Dems are going to provide just that."

Catherine added "Stephen is a great candidate with enormous energy and drive and will set this campaign alight, good luck to him and the local team.

Catherine Bearder was the candidate for Henley in the 2001 General Election when Boris Johnson first stood in Henley and she put the Liberal Democrats in the good 2nd place that they have retained ever since.