Ahead of talks between Ministers at the EU Council meeting this week, Catherine Bearder has written to Norman Baker to urge the UK government to stand firm against the lobbying of the Canadian oil industry and remain committed to being the greenest government ever. 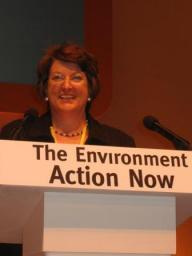 "I write to you in view of your department's current consideration of the European Commission's proposal to implement provisions of Article 7a of the EU Fuel Quality Directive (FQD) and the forthcoming meeting of Energy ministers at the EU Council.

As you are aware these provisions set a baseline value for greenhouse gas emissions caused by transport fuels and also set a value for unconventional fuels, which include the type derived from natural bitumen, or tar sands.

I am happy to see that you remain committed to the Government's endeavours to stick to the aspiration to be the 'greenest ever', and as part of this to tackle the highly polluting industry and to properly rate the emissions on tar sands, where extracting oil can produce three times as much CO2 as other more conventional feedstuffs.

However, recent press coverage has suggested Canada and the oil lobby is attempting to curry favour with the UK in a bid encourage opposition to specific tar sands values in the FQD as it attempts to utilise its vast resources. Canada has also attempted to get the exemption from the FQD in place before the Free Trade Agreement (CET) is completed later this year, thus linking the two pieces of legislation.

I was also dismayed to see Canada pull out of Kyoto which suggests its Government is not wavering in its commitment to reducing greenhouse gas emissions.

I would urge you to stand firm and put climate change ahead of trade interests with Canada.

In the European Union we have been opposed to importing tar sands because of the damage it causes to the planet, which is why we have been pressing for this to be specified in the FQD. We are not discriminating against other feedstock as these will be included as soon at the technical data is delivered.

Our environmental commitments must not be forgotten and must not be confused with our trade deals with Canada or other countries.

The aim of the Fuel Quality Directive is to reduce Greenhouse Gas Emissions from transport fuels by six per cent, and will, as soon as possible, and as the science catches up, set the values of all feedstocks imported into the EU, as required by the WTO rules.

As a member of the European Parliament I am fully supportive of the steps the Commission is taking to cut pollution.

But this can only happen if the directive is implemented by all European countries and this means default values for fuels with higher greenhouse gas emissions, as well as making sure we have robust and supplier-specific reporting to ensure the six per cent reduction is met.

Please accept the commission's current proposals which are in full compliance with EU international trade obligations and Canadian lobbying and ensure that in the Council the Commissioners recommendations are accepted.