Milton Keynes' Lib Dems launched their local election campaign with a strong recycling message and the help of one of their local MEPs. 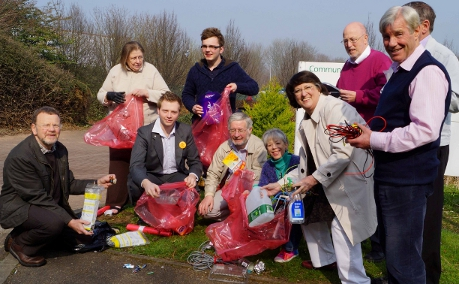 Recycling rates are rising across the South East, but where do your plastic bottles, cans and newspapers actually end up?

Catherine Bearder MEP has asked local authorities to explain where recycled waste is taken, is it put in landfill? Is it incinerated? Is it shipped to China?

Catherine said: "Is it a case of out of sight, out of mind? What happens next to our junk? There is evidence to show toxic waste from EU countries winds up in the developing world because it is a cheap dumping ground.

"My campaign is aimed at encouraging people to recycle and making sure when we do, it ends up in the right place. My message is simple: Don't Rubbish Our Recycling!"

In Milton Keynes, the Lib Dems have made great strides in recycling making Milton Keynes one of the best areas in theUK for recycling. Under their administration the first purpose built Materials Recycling Facility (where the launch is) was opened in 1993. The Lib Dems also:

· Latest Lib Dem recycling innovation has been the collection of batteries.