Catherine Bearder pledges to be a fisherman's friend

A campaign aimed at improving EU fishing laws has been backed by Catherine Bearder MEP who has pledged to strike a better deal for Eastbourne's fishermen. 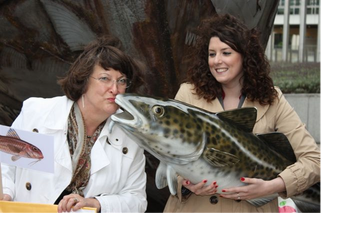 Mrs Bearder will meet with fishermen and environmental activists at the Eastbourne Bonfire Society Event - Rock the Redoubt at the Redoubt Fortress in Eastbourne.

Activists plan to present the Liberal Democrat MEP with a six-foot long fishing net filled with 650 fish cards signed by people in the town on Saturday (September 1).

It is part of the Be a Fisherman's Friend campaign, which has pulled together fishermen from around the South East and South West to change the EU Common Fisheries Policy.

Evie Sier, an Eastbourne Greenpeace volunteer, said: "As it stands the legislation is a total shambles. It was supposed to protect our seas from overfishing, but managed to achieve the exact opposite.

"It favoured big European fishing interests and threatened the livelihoods of small-scale fishermen, many of whom are the true cornerstone of sustainable fishing."

Graham Doswell, who has been a fisherman in Eastbourne for 35 years, said: "It's a classic story of greed and privilege. Big fishing barons have sewn up most of the fishing rights, leaving the small guys like us to share the leftovers.

"We've been fishing sustainably for generations - the law should support fisherman like us, not force us out. All we're asking is for a fair crack at the fishing quotas so that we're able to make a living out of sustainable fishing."

Mrs Bearder is vice president of the Fish for Future Campaign, which is a cross-party group of MEPs led by Lib Dem Chris Davies.

She said: "Fishing has been a way of life in coastal communities like Eastbourne for hundreds of years and we want future generations to be able to benefit from this heritage too.

"This year we have a once-in-a-decade chance to change the failed EU law governing the industry, put the health of our oceans first and offer a better deal to our fishermen."

Stephen Lloyd MP said: "For better or worse fish law is decided in Brussels and in Catherine, Eastbourne's fishermen have a doughty fighter!"