The European Union has been negotiating a comprehensive trade agreement with the Canadian government, known as CETA. 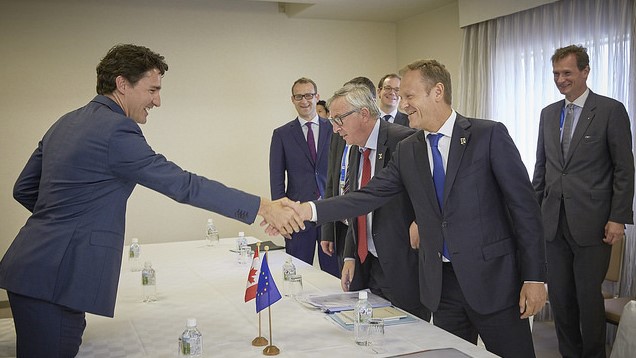 The negotiations have taken seven years for a conclusion to be reached between each European member country and Canada.

Last week, Canadian Prime Minister Justin Trudeau, had been due to sign the deal but one of Belgium’s four regions refused to ratify it which delayed the process further.

Agreement was reached late last week and the deal was signed on Sunday.

“Politicians and commentators who claim trade deals are as easy as pie are mistaken and are fooling the British public. CETA goes to show the uphill struggle we have ahead with the Brexit trade negotiations.

“The benefits to the people of Europe will be tremendous: trade tariffs will be reduced by 98%, trade will increase by 20% and EU exporters will save EUR500 million annually. Brexit will mean the UK has to negotiate a trade with Canada from scratch.”

“The estimated benefits to the people of Europe of this comprehensive trade deal are potentially tremendous: EU wide trade tariffs will be reduced by up to 98%, Canadian/EU trade will increase by 20% and EU exporters will benefit to the tune of £450 million annually. If the UK leaves the EU it could mean the UK has to renegotiate a trade with Canada from scratch.”