Inspectors must check to ensure conditions are up to scratch at Ramsgate if live animal exports are to continue, Catherine Bearder MEP has said. 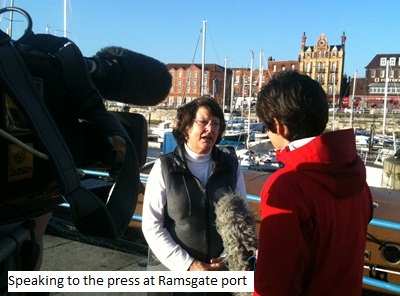 Campaigners from KALE (Kent Against Live Animal Exports) raised concerns after monitoring a recent convoy at the port.

The group watched two transporters loaded with sheep as they were driven onto the vessel Joline before an aborted attempt to cross the English Channel on Wednesday, November 21.

Catherine has written to the UK Government's Department for Environment, Food and Rural Affairs (DEFRA), as well as the European Union's Food and Veterinary Office (FVO).

She said: "The welfare of animals being transported across Europe in this way is always a huge concern.

"I would like to make sure a number of measures to improve conditions for animals are in definitely in place and have asked for urgent responses."

Vets checked the animals on their return to port. But the RSPCA has called for a full investigation into last week's sailing from Ramsgate.

In September, Catherine asked the European Commission to clarify what steps were being taken to ensure the welfare of exported livestock following the death of 45 sheep at the same port.

The FVO visited the port of Dover in 2008 and Catherine has asked whether it has checked Ramsgate, or plans to do so in the near future.