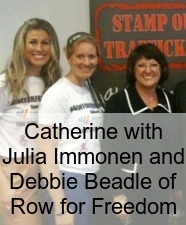 The Row for Freedom crew became the first all-female team to cross the Atlantic Ocean unaided following 45 days at sea.

More people have flown into space and climbed Mount Everest than row across an ocean, but the quintet successfully pulled into Barbados this morning (SUNDAY).

The challenge was aimed at raising awareness of human trafficking and to raise money to support ECPAT UK, which lobbies against child exploitation and A21, an anti-trafficking organisation.

Catherine, who also campaigns against trafficking, has been paying closing attention to the team's progress since it left the Canary Islands in December.

She said: "This is a phenomenal achievement… they have shown grit, determination and worked so well as a team to finish this challenge.

"What they have also done is managed to thrust the issue of human trafficking into the headlines and into people's thoughts.

"The girls have played their part, we now need to spread the word about human trafficking and support these two brilliant charities.

Catherine is aiming to combat the problem at the London 2012 Olympics after evidence showed an increase in women trafficked into the sex industry around big sport tournaments.

She has also called upon UEFA president Michel Platini to raise awareness of the issue ahead of this summer's European Football Championships in Poland and Ukraine.

You can find out more about the Row for Freedom and donate here.

You can sign Catherine's petition to Stamp Out Trafficking at the Olympics here.