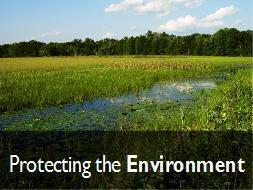 The European Parliament has called for a 'No Net Loss' principle, so countries which damage nature also compensate for the hit.

It came as a report revealed the "silent crisis" of biodiversity loss costs the EU around 450 billion Euros every year.

At the moment, countries first finance the destruction and then battle to find the money to fix it.

But Dutch MEP Gerban-Jan Gerbrandy, who presented his draft report in the environment committee yesterday, is keen to make "the polluter pay".

He said: "A quarter of the plants and animals in Europe are in danger of extinction. The destruction of nature will cost around three per cent annual economic growth.

"Natural capital needs to be integrated into the national accounts. It is profitable to cut down a forest, but we need to make it economically worthwhile to preserve it to."

Catherine Bearder, a Lib Dem South East MEP, agreed it made sense for Governments and companies to pay back for damage they have caused.

She added: "Biodiversity loss and overconsumption of natural resources are problems affecting all our regions and have a big impact on the lives of all EU citizens.

"Local and regional governments must consider these threats in their planning policies and the EU must make sure that environmental proofing is built into structural and cohesion Funding."

The report said: "It is now time to show that the warm words on biodiversity are more than just warm words and are reflected in concrete policy measures."

MEPs have said major European policies, such as the Common Agricultural Policy and Common Fisheries Policy can be adapted to protect biodiversity.

Gerbrandy added: "This is the most effective way to stop the decline of biodiversity. Subsidies that cause damage to nature must be eliminated as soon as possible.

"Now we pay twice: we first finance the destruction of nature and then pay to fix it."