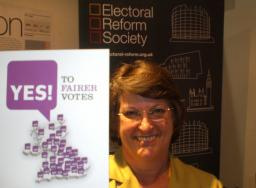 Today on Guy Fawkes Night the Yes! to Fairer Votes campaign will be launched. The campaign aims to persuade people to vote 'yes' for Alternative Vote in the UK referendum on a new voting system. The referendum will take place on 5th May 2011.

The campaign is non-partisan and unites people from different political parties and none. It is a campaign led by community organisations who want to have a fairer way to elect their representatives.

Catherine Bearder said, "After the 2010 election two thirds of MPs were elected by less than 50% of voters support- the majority of their electors voted against them!"

"The Alternative Vote system will put an end to this. It will mean that all votes count."

"The AV system will do away with 'safe seats'. No longer would MPs sit in 'safe seats' - all MPs would have to work harder to win your vote, which must be better for democracy"