Bearder - Nothing endangered at this lunch!

Visiting MPs from Africa have met with MEPs and scientists to discuss how sustainable hunting of bushmeat is vital for ensuring food security and conserving wildlife. 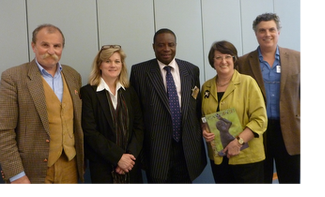 At a lunch seminar hosted by Catherine Bearder MEP at the European Parliament, MEPs called for protection of bushmeat to be factored into international development plans. Rural communities across central and western Africa depend on bushmeat to supplement their limited sources of food - bushmeat accounts for much of the protein in the diets of Africa's poor.

However, at current levels of consumption, eating bushmeat is not sustainable. This poses serious questions for future food security in rural areas, as well as for the survival of Africa's wildlife and biodiversity.

After the lunch Mrs Bearder commented, "It was great to see so many experts on the sustainable consumption of bushmeat at one table, with parliamentarians from across Europe and the ACP countries."

"Unsustainable use of bushmeat is a serious issue that threatens future food security in some of Africa's poorest regions, as well as the survival of its wildlife and natural biodiversity."

"As well as being consumed locally, there is also a flourishing illegal trade in bushmeat. Estimates suggest that over 270 million tonnes of illegal bushmeat is trafficked into the EU every year."