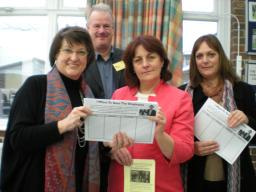 Tanzania and Zambia have asked for permission to sell their ivory stocks despite it being against the law. Previous 'one off sales' of ivory have led to a rise in poaching and a greater risk of elephant extinction in huge parts of Africa.

Many countries across Africa, led by Kenya and Mali, are strongly opposed to the proposal. Representatives from these countries are urging the European Union and Britain not to support the sale. A decision will be made on their request at a meeting of CITES (an international body that controls endangered species trade) in Qatar next March.

Catherine, who last week met with representatives from the African Elephant Coalition, said, "I've started this petition to highlight the massive opposition to any ivory sale and to downgrading the protection status of elephants."

"The ban in trading African ivory was introduced to strangle the market for Ivory. If trading is resumed, even for a brief period, this demand will be re-established. It is impossible to show which ivory is 'legal' and which is poached once it is turned into trinkets. We need to do all in our power to prevent that from happening."

"I encourage people to sign our petition, and get your MPs and MEPs to do the same."