Lib Dem MEP Catherine Bearder has called for honesty from the Tanzanian President over plans to build a motorway in the Serengeti nature reserve straight across important migration routes. 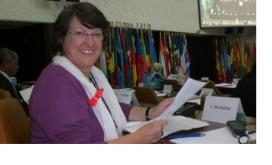 Contrasting messages have emerged from President Kikwete of Tanzania over the last couple of weeks. After he claimed the Serengeti highway will be built by hook or by crook, President Kikwete indicated at the World Economic Forum in Davos that he would not go ahead with the plans in face of such strong opposition.

This concession came days before the World Bank offered to fund an alternative route to the South of the Serengeti that would bypass the migration routes.

Mrs Bearder, who is an environmental campaigner and member of the European Parliament's delegation to the ACP countries, commented:

"Building a highway across an ancient migration route would devastate one of the world's most precious ecosystems."

"The former President of Tanzania, the late Julius Nyerere, pledged to protect the precious ecosystems of the Serengeti, but his successor doesn't appear to have the same commitment to the environment."

"The damage this highway would cause to the Serengeti's wildlife would also have serious economic consequences for Tanzania's tourist industry."

"The Tanzanian President must clarify his position rather than saying one thing one week and another the next."

"I hope to hear President Kikwete announce he will abandon these discredited plans and pursue an alternative route for the highway."

"The Serengeti is treasured by the people of Tanzania, but it is also of huge importance to the world - and the world is watching."