Back Catherine’s campaign to Stamp out trafficking

Catherine Bearder, Lib Dem MEP for the South East, has launched a campaign to stamp out trafficking at our Olympics.
Catherine wants to raise awareness about the issue of human trafficking in Britain and take action to tackle this problem in the run-up to the 2012 games. 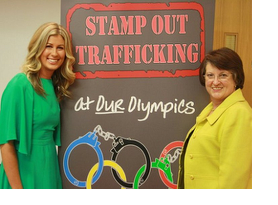 Previous Olympics and other large sporting events have led to a rise in trafficking of women and girls to satisfy the demand for the sex industry.

South East Euro MP Catherine Bearder said, “Trafficking doesn’t just occur on the other side of the world - it happens here in our towns and cities. Sporting events such as the Olympics increase trafficking.

“No human life should be bought or sold as a commodity. We must do all we can to fight this 21st Century slave trade.”

Visit http://campaigns.libdems.org.uk/stampout today to sign the petition and back Catherine’s campaign.